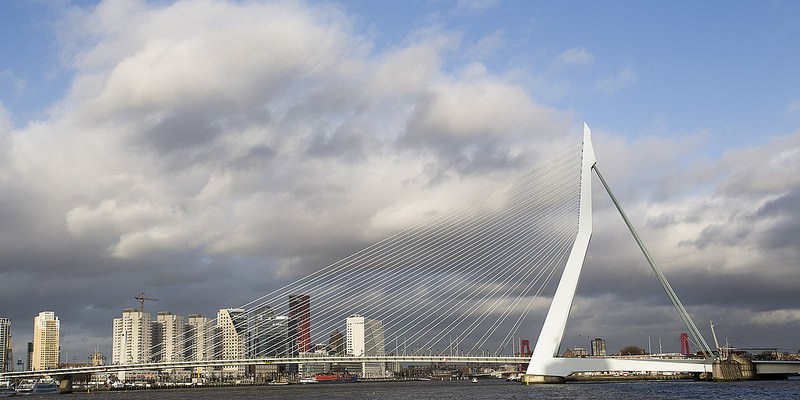 As the Bird Flies: Guide to Rotterdam

We asked Stena Line superfan and Dutch resident Frankie Thomson of As the Bird Flies to give her top tips of things to do in Rotterdam. Here’s what she told us…

Things to do in Rotterdam

Just over thirty minutes away from the Hook of Holland, the city of Rotterdam lies in wait… waiting for you to discover its charms.

Thanks partly to an excellent and affordable public transport network – a three day travel card on buses, trams and the Metro is just 14 Euros – but mostly due to a plethora of things to do, Rotterdam is a city not to be overlooked in favour of its better known “big brother” Amsterdam.

Go up the Euromast 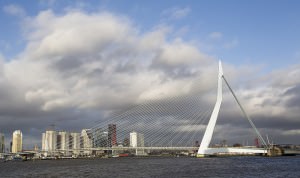 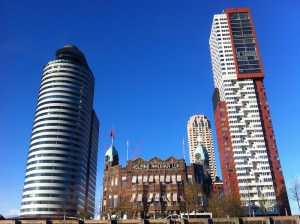 Rotterdam is considered the only city in the Netherlands with a real skyline and to fully appreciate how striking this is you need to go up and find yourself a good viewpoint. Ascending the Euromast will give you an idea of what Rotterdam looks like with wide sweeping views of its downtown areas and vast industrial surroundings; it’s easy to see why the Port of Rotterdam is the third largest in the world. Unlike many similar tall buildings in cities across the world, the Euromast was always intended to be used as a viewing platform, rather than a television or communications tower. Nowadays the 1960s monument is a popular place for a special dinner or evening drink and if you’re feeling very brave you can even abseil down the side…

Dominated by the River Maas which connects the city to the North Sea, the river’s wide stretch was incremental to allowing huge passenger ships to sail in and out when European immigration and travel to the “New World” was at its peak a century or so ago. Nowadays it makes for some special waterfront sunsets as well as being home to a collection of very impressive bridges, including the iconic Erasmusbrug. See the city close up by either taking a water taxi to Wilhelminapier for dinner or a museum, or splash out – not literally! – on a luxurious river cruise or enjoy a unique tour of the port with a Spido tour.

Quickly shake off those sea legs because you’re about to experience Rotterdam like a local. With its generous wide roads and well-developed and connected downtown area, Rotterdam is a very easy city to get around by bike. Bike hire companies will vary a little in price – around 10 Euros a day is average – and as long as you stick to the right and stay on the bike lines, you’ll enjoy seeing the city like the locals do.

Among certain (young!) circles, Rotterdam is known for one special thing; its nightlife. The centre of which is Witte de Withstraat and surrounding streets. A funky area full of cocktail bars, late night drinking options and typical Dutch “brown bar” pubs, you can take your pick in this corner of the city that never sleeps. Even if you’re not up for an all-nighter you can easily find a great place to eat in this part of town – I recommend Rodin for something a little fancy but not pretentious or if you’re just looking for a snack try Bagel Bakery – both can be found on Schilderstraat.

Hotel New York is teeped in history; it’s the former headquarters for the Holland-Amerika Lijn ferry company. It’s also perfectly located for a 270 degree view of the River Maas and surrounding waterfront properties which are both historical and classic examples of Rotterdam’s innovative modern architecture. Young and old is also a good way to describe Hotel New York, whose art-deco interior resembles that of a ship, but its approach to good quality food and dining stays fresh. Go here for a memorable dinner or lazy lunch and expect delicious seafood and a lot of style.

That famous Rotterdam skyline is composed of a bold mix of futuristic, minimalist and downright weird architecture which has design enthusiasts descending on the city all year round. Very impressively documented in the Netherlands Architecture Institute you only really need to open your eyes to find striking examples like the Cube Houses and the Erasmusbrug.

Get lost in a Museum or three…

Apparently Amsterdam boasts more museums per capita than any other city, but Rotterdam is still home to some of the best museums in the Netherlands. My favourites are the Wilhelminapier-located Nederlands Fotomuseum– a brilliant photography museum with very special “dark room” area dedicated to the country’s history of photography – and the incomparable Museum Boijmans van Beuningen – a must-visit for anyone with only a small interest in modern art, though you must allow at least half a day to get the most out of your ticket price.

Do you have any other recommendations for Rotterdam? We’d love to hear them!

Stena Line operates a twice-daily ferry crossing from Harwich to Hoek van Holland, which is just half an hour from Rotterdam.

Tags: Architecture, As the Bird Flies, bikes, Euromast, ferry to holland, Frankie Thompson, guest blog, guest post, Live like a local, Rotterdam, Things to do, Things to do in Rotterdam, Witte de Withstraat