Like most people, I’ve always had a very keen interest in music.  Even from a early age I was collecting music and back in the 80s that even involved recording music from the radio on tape, highly illegal I’m sure, but it was the 80s, I was under 10, always the rebel without a clue, what 10 year old wasn’t?   I remember buying my first 7″ single in Fitzgerald’s Music Shop, now a derelict building on the main drag in my home town, Sligo on Ireland’s wild North West coast. It was in 1981 when I was just 7 years old.  The single was by Bad Manners a Ska band from the UK, the track was My Girl Lollipop and when I listen to it now I cringe but it does bring a smile to my face and had I kept it in pristine condition, I would get a whopping 50p for it on Discogs Marketplace!

Anyway, enough of that, skip forward 35 years and I am still collecting vinyl.  My collection grew to over 2000 records at one stage before I sold most of them, something I regret and gives me blue tearz now.  Gradually I’ve been building my collection again, but this time I’m being more selective about what I buy.  Have you ever tried moving 2000 records from city to city, from flat to flat, it’s a bit of a nightmare, so I want to keep it manageable, but that’s easier said than done.

On one of of my recent trips to Amsterdam this year , I decided to check out what the city had to offer to the vinyl buying buff like myself.  Here’s the top 5 stores that I managed to visit on my trip. 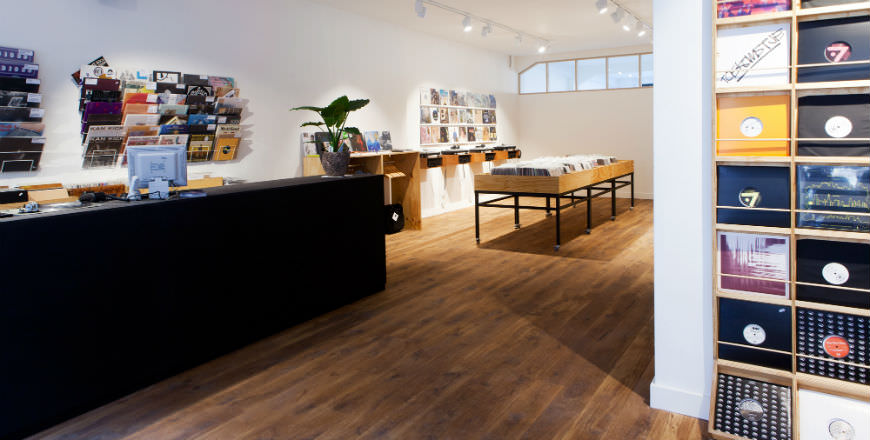 One of my favorite stores is Rush Hour Records, a bright, spacious, well stocked store, right slap bang in the heart of Amsterdam, behind the bustling Dam Square.  Originally, this small store opened its doors on Spuistraat to the Amsterdam music fraternity in 1997, but recently they’ve moved to a bigger premises 200 metres up the road, closer to Dam Square, where they continue to serve the people of Amsterdam extremely well.  Rush Hour specialises in new and second hand Electro, Techno, House, Disco, Jazz, Funk, Rock, Prog and so many other genres in between. As with many stores in the Dutch Capital, and in the Netherlands, Rush Hour is also a record label and distributor. 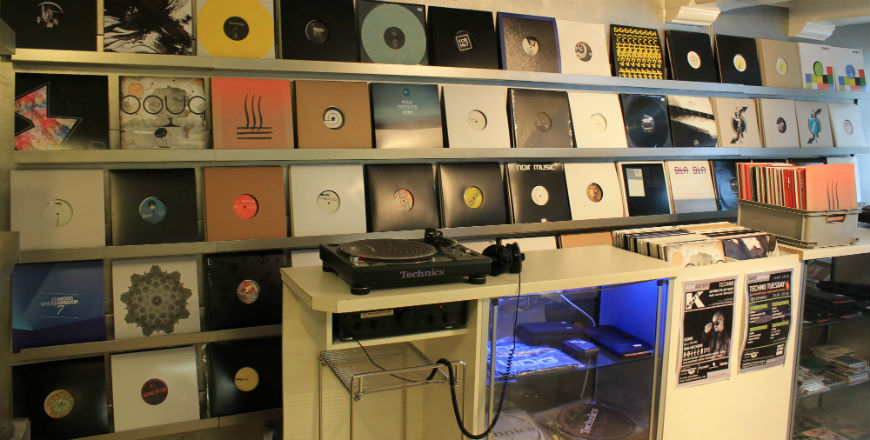 Always a firm favorite of mine, InDeep’n’Dance Records is located in Jordaan, just west of the city centre.  This fantastic electronic music store is the Netherlands  leading supplier and distributor of House, Techno and Electronic vinyl. Deep in it’s shelves you’ll find records by some of the world’s best electronic music producers, both underground and more mainstream.  The store has been selling vinyl to Amsterdamers and electronic music buffs from around Europe and indeed, the world, since 1999, and has a fantastic reputation.  InDeep’n’Dance is also a record label, DJ equipment supplier, t-shirt designer, award winning party organisers and they even plan to launch a digital downloads shop launched in the near future, so watch this space. 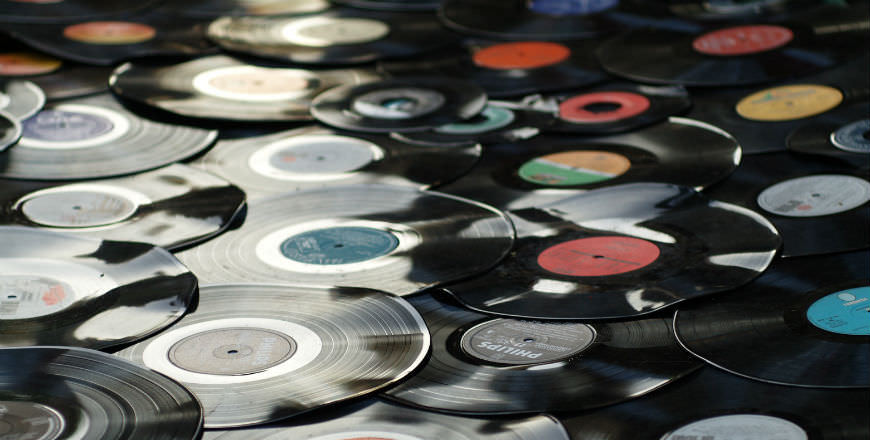 Waxwell Records was established in 2005 and is located right in the heart of historic Amsterdam city centre, just on the western edge of the Red-Light District.  It has a great reputation for selling used and new vinyl for DJs, record collectors and every other music enthusiast.  Under its roof you will find a diverse selection of Hip-Hop, Disco, Jazz, Soul, Funk, Reggae, Rock and Pop records.   For those of you looking for Dutch Breaks, Dutch Electro and Brazilian Lps and 12″s, then this is definitely work a visit. 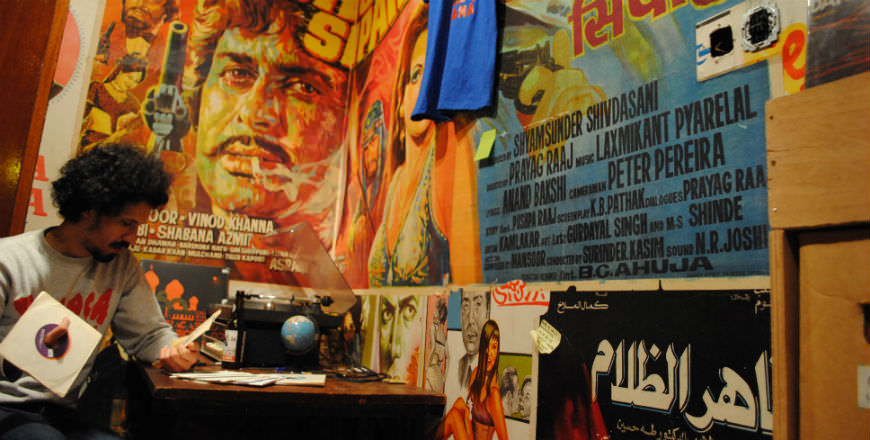 If you are looking for something a little out of the ordinary and tropical super funky recordings float your boat, then look no further than Amsterdam’s smallest used record store, Vintage Voudou Records.  In this well stocked, tiny store which has been an Amsterdam landmark for the past 20 years, you’ll find some seriously collectible records from the 50’s, 60’s and 70’s covering Calypso, Caribbean, Salsa, Belly Dance, Brazilian, African Jazz and Funk, Ska, Reggae, Bollywood, Oriental, Film Soundtracks, Beat, Exotica, and Psych to name but a few.  Think of the weirdest music out there and these guys will be sure to either have it or to get it for you from somewhere.  Even if any of these genres don’t appeal, it’s worth a visit anyway just for its quirkiness!  They also release music through their very own label, Bombay Connection. Check it out! 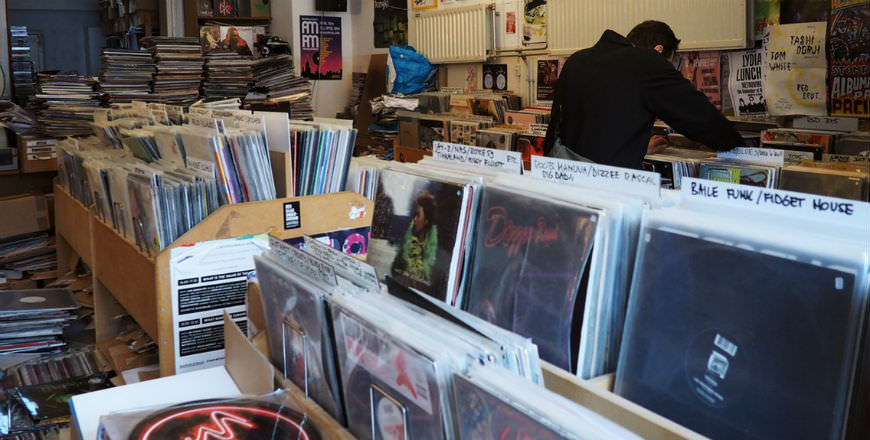 As the name suggests, Distortion Records sells the finest selection of Lo-fi, Indie, Hardcore, Punk, Post-Punk, Post Rock, Noise, Garage, Industrial and America Alt. Rock records that can be found anywhere in Amsterdam.  This haphazard store can be found west of Amsterdam city centre, in Jodaan.    It specialises in niche and hard to find guitar records that most people haven’t even heard of, but it also,  they sell ’80s and ’90s Indie, Electro, Hip-Hop and reggae and a fast growing a fast growing IDM, Electronica, Trip-Hop, Drum’n’Bass and Jungle section.  Recently, they’ve started to import records from the UK  and this is starting to show in the stock, some awesome titles can be found here.

Stena Line offer a day and night time sailing from Harwich to the Hook of Holland.  Find the best prices for your next trip to Holland on www.stenaline.co.uk/ferry-to-holland.  Alternatively, Stena Line offers a Rail & Sail ticket which takes you from Liverpool Street in the heart of London to Amsterdam Central. 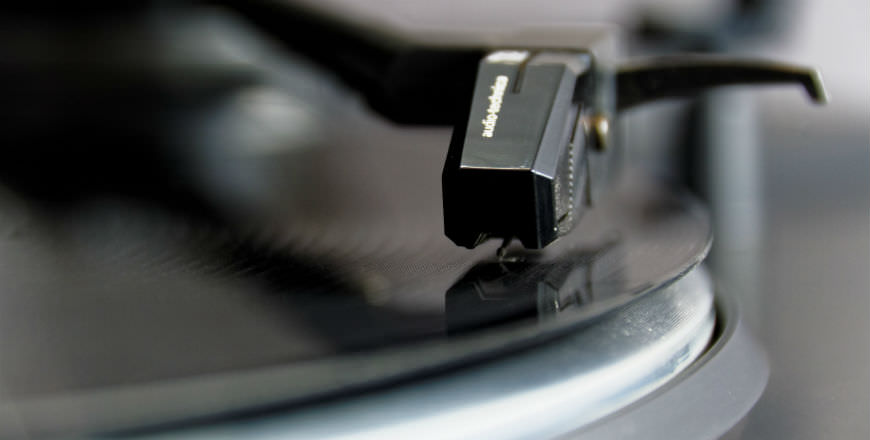