Two Wheeled Odyssey, Hook of Holland to Amsterdam by bike

It was a dull dreary cold winter’s day in Central London when the post arrived at my office. The building security guard plonked the letters and magazines down on my table, moaned about the weather, nothing new.  As I flicked through the junk I noticed one that was addressed to me for a change.  No way, it was an invite to our staff party, a beach party in the Hook of Holland in June!  My mind raced and I was transported to the beach with sun, sand, sea, good food, great company, a drink in my hand and a blissful smile on my face. Then the phone rang, reality check; best get back to work, that Landing Page for the website isn’t going to create itself.

When I close my eyes and think of Holland, I see windmills, cheese, clogs, a sea of orange and of course CYCLING, my favorite pass-time.  The cogs in my head creaked into action, a thought, I can kill two birds with one stone, I’ve always wanted to cycle to Amsterdam and there’s the party of course.  I knew that friends were flat-swapping the same weekend as the party, excellent, I can cook up a plan. 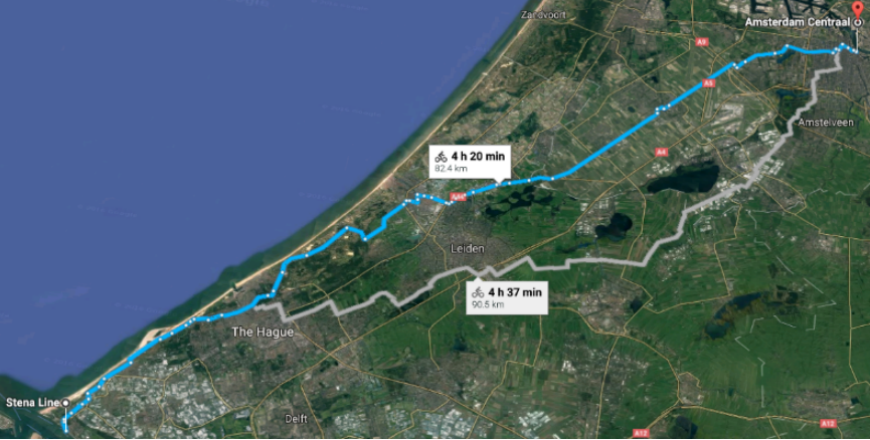 At last, the much anticipated holiday time arrived, I needed to get to Harwich to catch a ferry but, surprise, surprise, there are no trains, too much rain.  What!  In summer, in Britain, how strange.  Luckily I can resort to Plan B, so I packed the car and got on the road.

This was my first time crossing to the Hook of Holland so I was a little excited to be honest, I love travelling, no matter where and how. Boarding was so easy with the bike, check in and passport control with the cars and motorbikes, then cycle to the ferry, up the ramp and in we go. I thought it would be a good plan to bring strap to fix the bike while we were sailing and this proved to be a good idea. I also locked my bike for extra stability.

The next step was to find my cabin. I wandered up countless flights of stairs and was thinking, this ferry travel would keep you fit for sure. Finally I reached deck 11, my cabins was somewhere on this deck. I was surprised; it was like a floating hotel up here, corridor after corridor of cabins and suites.

After a fantastic nights sleep in my more than comfortable cabin, I am rudely awoken by the sound of Bobby Mc Ferren’s “Don’t Worry Be Happy” on the ship’s tannoy, ugh.  Anyway, I’m ready for breakfast and my 160+km cycle to Amsterdam and back!  Disembarking is just as easy as boarding and I am soon on the road after a quick passport check and a map check to find the start of the cycle-way to Amsterdam.  Weather is just grand, overcast, cool even a little bit of coastal fog to keep me cool on my spin. 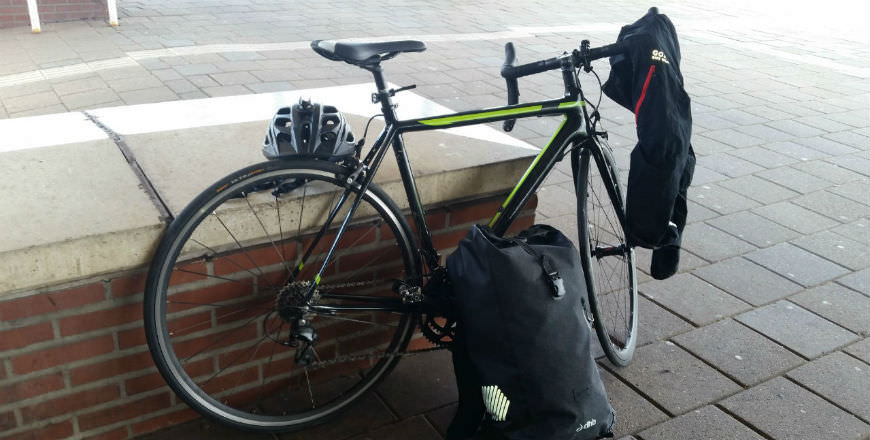 The cycle-way opens out in front of me, nothing but miles and miles of quiet tracks through rolling sand dunes interspersed with glimpses of the North Sea stretching as far as the eye can see.  It’s amazing, the Netherlands is one of Europe’s most densely populated countries but you would never think it on Friday morning, it’s so sleepy, a few cyclists and walkers here and there but that’s it, perfection.  I battle on, bit of a head wind but nothing to complain about yet.  Hmmm, scrap that, I remember a friend of mine from home in Ireland telling me that he lived in Holland for a summer when he was a student type.  He cycled 30 km to work and back everyday and said that, no matter what direction you cycled, at whatever time of the day of night, there was a head-wind to hinder your progress … Mr Harte, you were indeed correct!

On the outskirts of the Hague something pretty funny happened to me.  I hopped off the bike, over a wall into some wasteland, all that water to keep you hydrated doesn’t just sweat out your pores you know!  As I did I heard the sound of police sirens screaming in the distance and I noticed two people watching me from a bus stop close by-ish, just before I disappeared rustling into the undergrowth.  I stayed still watching them for a minute.  A thought came to mind when I saw that they have their mobile phones out and are talking to each other frantically.  Oh man, they’re probably looking for news reports about a cycle crazed ginger fugitive on the run in Holland, police searching, checkpoints, marauding packs of police dogs, the whole might of the Dutch police force and warning, armed with toolkit and dangerous, do not approach, NOT AT YOUR PERIL!

With that in mind, I hoped back over the wall, got onto my bike and continued on my journey, past the two people sitting at the bus stop, their mouths open and staring hard.  As I passed I muttered, “Sorry, had to spend a penny” and beamed a huge smile.  I pedaled as fast as my legs could manage to the next intersection, hung a right turn and disappeared from sight.  I’m sure it gave them something to talk about with family and friends over dinner or at the pub that evening.  I hope I didn’t disappoint when they realised I was just another innocent cycling tourist. 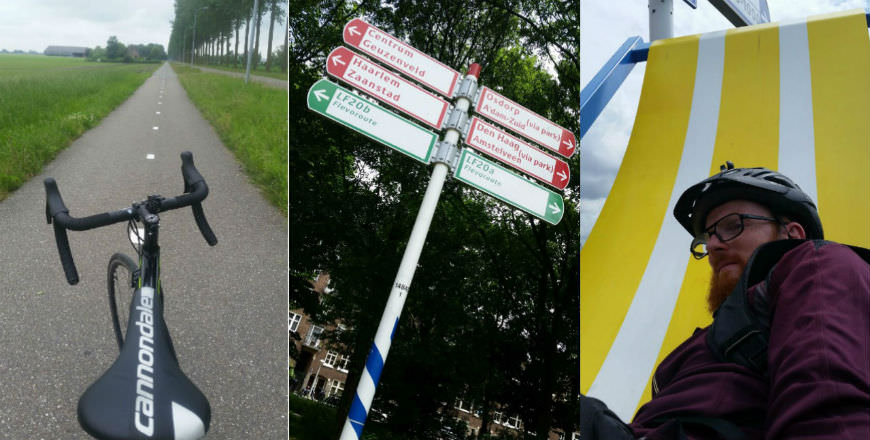 With the excitement over, I pedaled ever closer to Amsterdam.  Past windmills and farms, Scheveningen beach and the rolling Wassenaar sand dunes, along the outer edge of the ancient city of Leiden, along Hoofdweg, mile upon mile of tree lined canals and avenues stretching into the horizon. Conditions were perfect, still cool and a little cloudy, I could go hell for leather and hit the Amsterdam city limits in my estimated 4 hour target.  On and on I rolled, passing the odd cyclist in the depths of the Dutch countryside, saying hello with an nod and a broad smile.

As I rounded a sharp right-hand corner at the end of Hoofdweg canal bank route, I cycled through a small forest and there is was, looming in the distance, peeking out of the flat landscape towards the expansive sky, Amsterdam.  I had made it.  Now all I had to do was navigate my way through the maze of canals to the city centre for some lunch.  No need to fret, Google maps to the rescue, the best companion any cyclists can have in any city you care to visit! 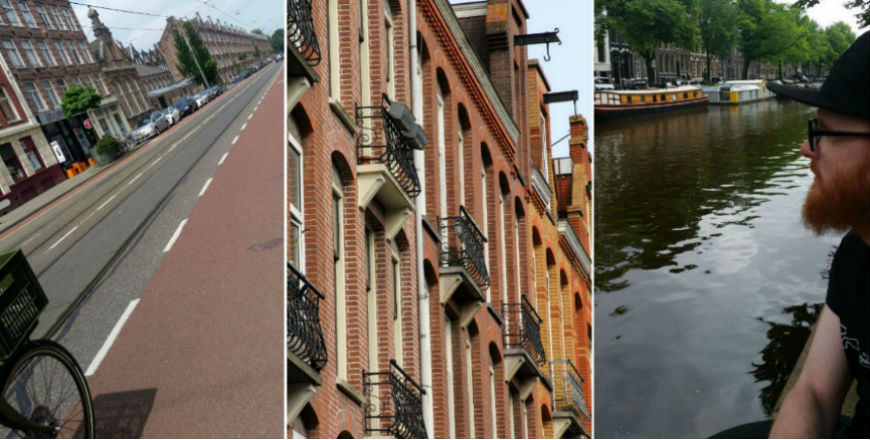 As I arrived into the city centre after careful navigation, the sun began to shine, what perfect timing.  Within a half hour I was relaxing after getting my lunch from Broodje Bert Cafe, on Singel 321-4.  I knew a great little park near the city centre where I could have a lazy afternoon.  I headed to Marnixpool skate park where I sat back eating my delicious BLT, sipping on a cappuccino and watching Amsterdam’s finest BMX and skateboarders flip and spin in the concrete bowl, what better way to while away a few hours and recuperate after my long spin.

After a well chilled afternoon in the sun, the time came to meet up with my friends, so I wandered through the narrow streets to the Westerpark area of the city where I would be spending the night.  This having been the second time my friends and I  had visited Amsterdam, we didn’t want to venture into the touristy city centre.  Also, being old fogies, in our 40’s, we decided we would stay in the Westerpark area and see how the locals liked to spend their time.  The park is awesome, there’s lots of great bars and restaurants scattered all around it.  We decided to go the easy way and grab a craft beer brewed in “Westergasfabriek“, a bar located in a converted gas works right inside the park.  We followed these tasty beverages with some international cuisine in “Pacific Parc“, a bar/restaurant/night club with a brilliant outdoor seating area offering awesome views of the park.  We sat back, gorged on delicious food and drinks alongside Amsterdam’s hipsters, young professionals with some great vibes playing on the sound system, not a bad way to end the perfect Dutch cycling day.

It was then that I had the thought, oh man, I have to wake up early tomorrow and do it all over again, Hook of Holland, here I come, better get those stiff legs working! 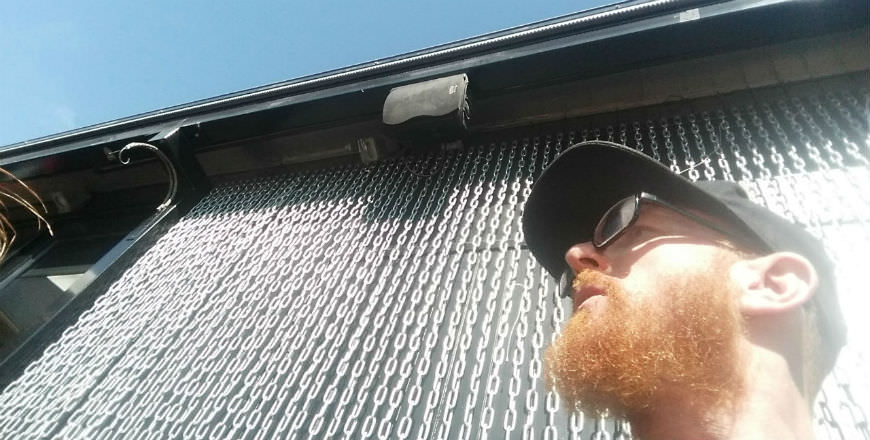 Chilling in the sunshine at the party

Stena Line offer a day and night time sailing from Harwich to the Hook of Holland.  Find the best prices for your next trip to Holland on www.stenaline.co.uk.  Alternatively, Stena Line offers a Rail & Sail ticket which takes you from Liverpool Street in the heart of London to Amsterdam Central.