As the Bird Flies: Guide to De Pijp area in Amsterdam

Our regular guest blogger, Frankie Thompson of As the Bird Flies has offered up her insider knowledge to help you around the trendy De Pijp area of Amsterdam.

I often wonder how long an area can be “up and coming” before it finally “comes up” and reaches the peak of its journey to maximum popularity or gentrification? And what happens next? Does one then start to consider it as “down and out”? I wonder this because my new home, the Amsterdam suburb of De Pijp has been described as up and coming for the best part of the last decade… and counting.

So what is it about De Pijp that makes it up and coming? And why should you take time out of a visit to Amsterdam to explore this gem of an area?

150 years ago De Pijp was up and coming – literally – as in, it was going up thanks to a period of rapid construction in response to Amsterdam’s growing size.

75 years ago, De Pijp was the complete opposite to “up and coming” as working class and immigrant families moved in and anyone with any money or social standing promptly ignored the area, heading for waterfront properties along the three main rings of Amsterdam’s canals. It follows, as with most underdog areas of cities, that at the turn of the 21st century, De Pijp was fast becoming an affordable, centrally-located and multicultural neighbourhood. Elegant but neglected four-storey terraced houses were snapped up, done up and sold at a small premium to the young families and professionals who are still moving in today.

As for the name, well there are a number of theories why this neighbourhood is called “The Pipe”, one – which is most commonly believed – is that there was once a large gas supply company based here, called The Pipe. But some also think it has something to do with the area’s narrow pipe-like streets.

Arguably the most famous sight to see – and taste! – is Albert Cyup Markt, which runs along Albert Cyupstraat, funnily enough. A long road of over 100 shops and market stalls this is Amsterdam’s busiest market and runs every day of the week, except Sunday. Here is where you’ll get a little slice of what life is like in De Pijp with stall owners and workers coming from all over the world and residents loyally shopping local. With street food standing next to fabric and flower stalls, there is something for everyone. If you come here hungry, my recommendation is to try the poffertjes or stroopwafel which are freshly made. Yum!

If you come to De Pijp looking for something more than just a quick market snack, you’ll not be left hungry or disappointed. The area is packed full of restaurants, bars and coffee shops (the coffee kind!) and the cuisine cooked comes from all over the world thanks to the many different heritages of its residents (it used to be called  the Latin Quarter). I can personally recommend Cafe Schilders on Eerste van der Helstraat for their Piri-Piri chicken and homemade fries, Pasticceria on Van Woustraat for the best gelato in the area and Boulangerie 1072 on Ferdinand Bolstraat for great coffee, cakes, French bread and pastries. And for a romantic or relaxed dinner there’s great value for money to be found at sushi restaurant Hello Sushi, a swanky experience on offer at Restaurant De Ondeugd and the best Italian we’ve tasted locally is at District 5 on Van der Helstplein. 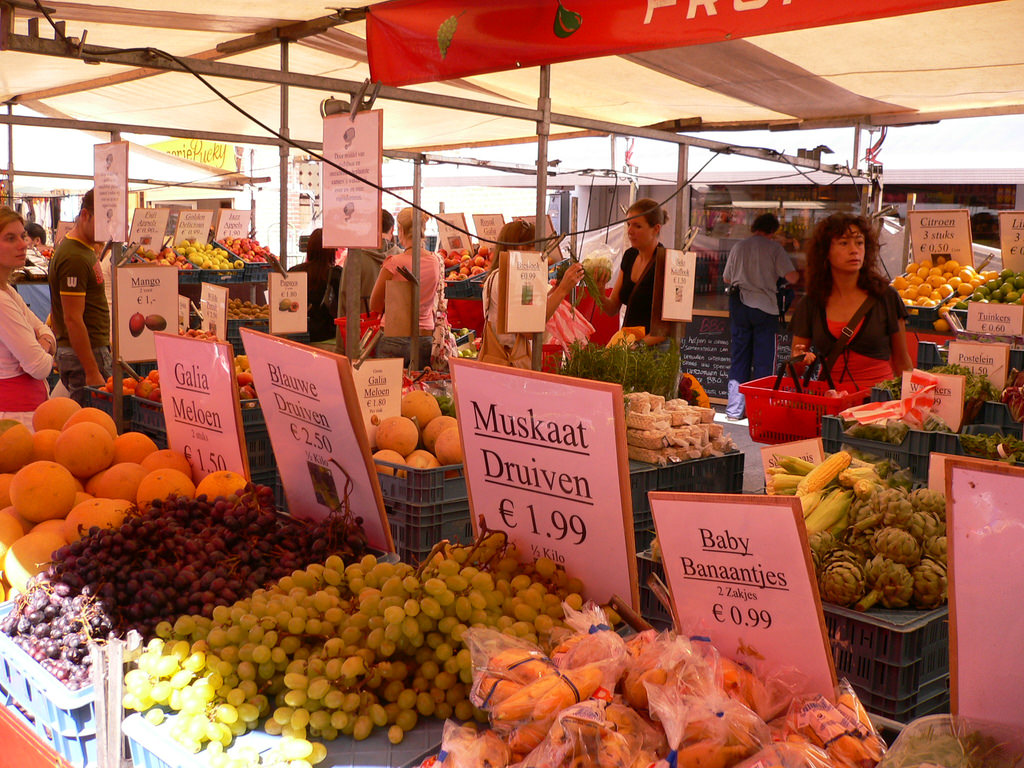 But De Pijp is not all about markets and food. If you find yourself in De Pijp you could seek out the Rialto Cinema on Ceintuurbaan, an art deco cinema that now shows films from all over the world and has a popular cafe. Keep your eyes open as you walk around because many of the street names close to Albert Cyupstraat are named after famous Dutch artists, including Frans Hals, Jan Steen and Vincent van Gogh. There is of course, the Heineken Experience too and there’s even a small Red Light District to be found on the Ruysdaelkade. For art and architecture fans, you should walk (or cycle) to the southern edge of De Pijp to find Diamantbuurt, an area full of AmsterdamSchool style buildings.

Stena Line operates a twice-daily ferry crossing from Harwich to Hoek van Holland, which is just an hour from Amsterdam.

Tags: As the Bird Flies, De Pijp, ferry to holland, Insider guide, Stena Line, things to do in Amsterdam